A number of players asked for details of the transmats game played at the First Antares Day, 2017. It poroved so popular that it has been included in the Antares 2 Playing the Game rulebook. Here it is in updated format and is a quick to set-up, matched scenario for 50-100 points.

An array of battlefield transmat plates have been dropped ahead of the main force but must be tested before they are used to bring in reinforcements. Your forces are to secure of these points at which the stacks are located and prevent the enemy from doing so. The problem, as ever, is taht your opponent wants to get hold of the transmats and reprogram them to do exactly the same thing!

For Ghar, the transmats present an opportunity for the High Commander to see how they affect the temperamental battlesuits and plasma reactors, as well as seeing whether or not they will even work on the heavily-GM’d Ghar physiology.

Set up terrain as described in the core rulebook. Then three transmat markers (up to 3” across) are placed on the table, one roughly in the centre and one roughly in each player’s table half, 15” from the base edges and approximately 12” in from each side table edge. They should roughly draw a diagonal line across the table (see diagram). If Ghar Empire are playing the plates should not be in difficult terrain, the terrain being adjusted by the players as necessary!

Each force is deployed on the table within one move (1M) distance of their base, long table edge.

Variant objectives of this scenario include just controlling the transmats. In such a scenario, the transmats are still functioning so can still transmat units to other transmat sites.

The game is played until six turns have elapsed. Then roll randomly to see if another turn is to be played.  Break points are ignored for this game.

Break points are ignored for this game: all that matters is whether or not the transmats are tested and under control.

It is recommended a victory is awarded to a side with 3 or more VPs than its opponent, otherwise a draw (winning or losing) is awarded.

Each transmat plate can be activated by a non-probe, infantry, mounted, weapon drone or equivalent command unit having one or models on the plate and that unit receiving a Run or Advance order, including a Run order made as part of a Reaction – all that matters is that the unit ends up with a Run or Advance order. The order triggers Reactions as normal, whether on departure or on arrival at a target transmat. A transmat is considered tested if it has been used to transfer a unit to another transmat in this fashion.

Once activated, the transmat plate can transfer the unit to another unoccupied plate on the table. Place one or more models on the target transmat plate and arrange the others around it within normal squad coherency distance.

Controlling units are any apart from sharded, probe and beast units. Control can be established by a unit having one or more of its models, or the body of its model, within 3” of a crashed core. Units that are Down are still counted as being able to establish control as a tactical decision to do so may well help their survivability, but at the cost of capability of course! To claim control, no other, enemy controlling units must be able to claim control of the objective.

Transmat templates can be downloaded from the image below. Print them out so that they are around 3″ or so across – they were created at 300px to the inch. 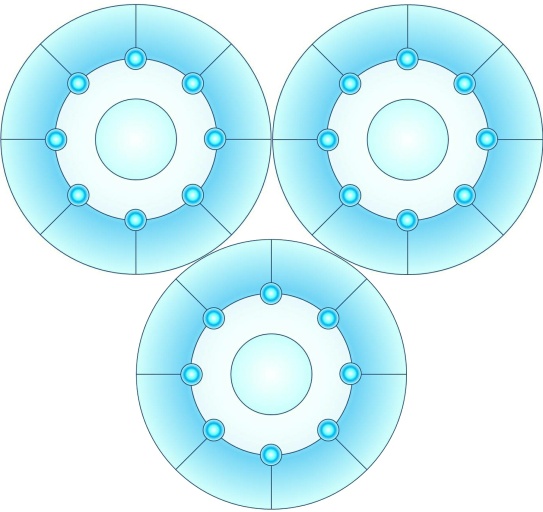 There have been several submissions or variants on this scenario, one of which was submitted to the original scenario competition by Steven Millar