The other parts in the series are Part I, Part II, Part III and Part V, and we have overview of the Batu and Baray story arc.

Prince Batu Delhren was infected by the Shamasai Dust, an ancient, virulent bionanospore that overcame all his shard interface implants (those given to all leaders of the Vardos Delhren). In a subsequent attack, his damaged shard implants were corrupted still further by the algorithms of a warlike drone species, so he exists in a rather precarious equilibrium with the Shamasai Shard.

The Shamasai Shard can be rather aggressive, even using Batu’s own body mass as energy to fuel its needs. As a result, the House Delhren assigned Batu a bodyguard-cum-protector, Decurion Baray Tsulmar, who has orders to both protect Batu and to kill him if his uncontrollable personal shard turns out to be a threat to the Freeborn house.

In the previous episodes of Plaguespore, Batu and Baray were sent to investigate a strange nanophage plague on the planet Tanchen. Having found a rescue orbital, the crew and they have boarded and woken the chief colonist from stasis sleep.

The Chief colonist was still groggy from being woken from stasis. He shivered as he held a hot mug in both hands, appearing to relish the warmth more than the drink. Batu leant back against one of the pure white bulkheads on board the ESS and watched the Chief Colonist pull a blanket over his shoulders.

The Chief saw him watching. “My enviro-suit’s turned up to max, but somehow it never seems warm enough.” He shivered again.

“I know what you mean,” said Baray. “I hate those emergency stasis pods.” She pulled another steaming mug from the food-fab. “Another mug?” The Chief nodded and she replaced the still-full mug in his hands, sat back down beside Ensign Elnar.

Commander Telidh spoke from the holovid. “So you’re absolutely sure you didn’t pull anything up with you?”

“No,” said Chief Tanchen. He took a sip before answering. “One of your fellow captains loaned us a Freeborn cleanser—“

“No, no,” said the chief. He lifted a hand away from the mug and waved it to emphasise his words. “It was all above board. I allowed myself to undergo non-disclosure, non-investigative, post-usage memory erase contract. We installed the cleanser in the ESS vestibule, just in case.” 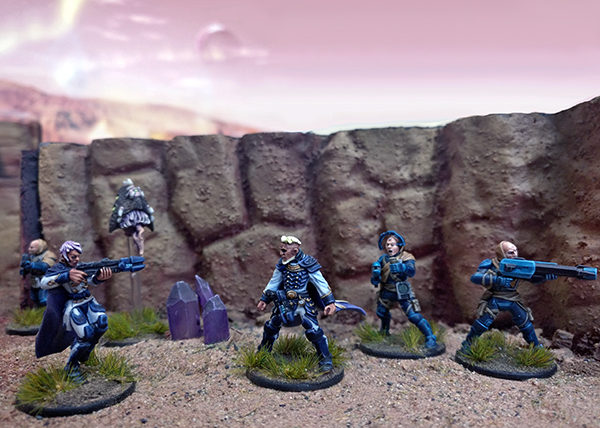 “You were already suspicious?” asked Telidh. “Why?”

The chief glanced at Batu. “It’s just… I mean.”

Batu sighed and groaned. “You mean, you’d heard about me on another desert planet and wondered.” The chief nodded. “But it detected nothing?”

“Then it’s probably not Shamasai Dust,” said Baray. “The cleansers went haywire having found the Dust but couldn’t remove from Batu without complete sterilisation.”

“She means killing me and incinerating me. In the sun,” said Batu.

The chief gulped. “But we’d have gotten up here without being infected. Surely we’d have been taken over?”

Baray shook her head. “No. All the survivors were infected, but only supradermally. The dust got everywhere even if we weren’t fully contaminated like Batu, but the cleansers wiped it off us.” She made a sour face. “It smarted a little as the top layer of skin had to come off – amongst other things – but we were cleaned out.” She looked at Elnar. “And you’ve sensed nothing?”

“No,” said Elnar. “I’ve run a forensic trace on everything I could find, even the grains of sand and dust on the shuttles, and there’s nothing.”

Batu pushed himself away from the wall. “The shuttle was some way from the destroyed habitat, though,” he said. “And that storm – vortex, dust-devil or whatever – looked more like it was composed of sand than dust.” He walked over to the food-fab, pulled down an energy bar.

The chief thought for a moment. “You might be right there. Extremely strange to have such large nanospore components.”

Batu swallowed. “A contradiction in terms, don’t you think?”

“Each grain of dust was an accumulation of nanospore,” said Baray. “They clumped together for co-operative interaction.”

“We think,” said Batu.  He scowled. “Truth is, we know little about it, still. But we do know that it is true nanospore – just of a composite form and with a mind of its own, like the IMTel.”

Batu grimaced. “It’s more that it’s got a mind of its own,” he said. “I’m not sure intelligence comes into it. It reacts… defensively, almost paranoid.” He finished the energy bar, dialled another.

“I don’t know about that,” said Baray, hurriedly. “On Shamasai it was pretty dangerous.”

Batu nodded emphatically. “We think it’s defensive, only reacting when it feels threatened. And we think it regards me as part of it – a host, if you like.”

“So you don’t know what it will do?” Elnar inched away from Batu.

“Strictly speaking, no.” Batu smiled. “But as long as I’m not threatened, it’s fine.”

Chief Tanchen had been following the conversation and now spoke up. “Sounds dangerous. Is that why you’ve been sent here?”

“Probably.” Batu glanced at Elnar. “Ensign Elnar here has done as much as she can using orbital scans but has picked up little more than low-grade comms chatter—“

“Yes, so we gathered from the intel you sent. But everything’s on a heavy silicon base.”

The chief shrugged. “Don’t know.” He shuddered and hunkered down deeper into his blanket. “And I don’t want to find out.”

Did you try to use any weapons against them?” asked Baray.

The chief scratched his head. “We’re not C3, just a research colony. All we had were basic defensive weapons. We had a fractal drill for mining, but…”

“As it was sand, it was minimal yes,” finished Baray. “Seems reasonable.”

Telidh interrupted from the holovid. “What about against the termite tower?”

The chief frowned. “What tower? There are no termites on Tanchen.”

Telidh glanced to one side and swept and image onto the holodisplay. “There’s a structure rising from the centre of the colony. It seems to be made of grains of plague sand.” The structure resembled a termite mound, tapered from a broad base to the tall funnel.

The chief colonist leant forward. “That wasn’t there when I went under. And I was the last.” He glanced from Ensign Elnar to Commander Telidh. “Are there any more of those tornadoes?”

“No,” said Elnar. “They’ve gone, whatever they were. The comms chatter is focused on this mound, and it’s low-grade chatter, too – very faint.”

“Bomb them, then,” said Batu. “If all the plague sand is in this construction, we could use a straightforward orbital bombardment.”

Baray looked horrified. “Absolutely not, sire. We’d destroy a lot, but all we’d do with the rest is disperse it.” On the holovid, Commander Telidh nodded in agreement.

“Can’t we send down drones?”

“Too vulnerable,” said the chief, shaking his head. “We lost them all. The first one to find the plague sand was destroyed as it reported back to us.”

“Elnar?” The sensors ensign also shook her head. Batu looked at Baray, saw her expression and groaned. “Oh, no. You’re going to say the only way we can investigate is to go down there, personally grab samples, see how to deal with it.” Baray smiled. “I thought so.” He gave another of his emphatic sighs.

“I’ll have a small squad accompany us down in a drop pod,” said Baray. “That way we won’t risk the shuttle until we have to. Elnar, grab your kit – you’re coming with us.” 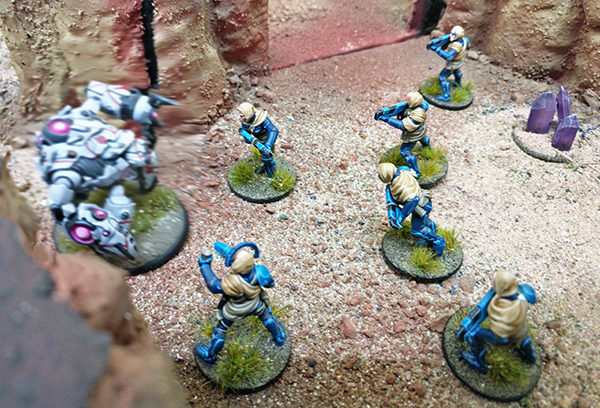 The ramps crashed down and Baray and her vardanari fanned out to either side of the pod. Warm air from the desert washed in and Batu’s enviro-suit kicked into gear. After a few moments, Baray waved Ensign Elnar and Batu forward. “Clear. For now.”

Batu pulled his cloak around him and strode down the ramp. Elnar quickly grabbed her gear,  slung it onto her back and stepped forward, monitors and samplers in her hands. On the sand, Batu stopped and regarded the tall spire of sand rising from the ruins of the settlement a quarter of a kiloyan away. He used his oral implant to quietly talk to his shard interface. “Anything, MyShard?”

“I’m getting some signals from the Shamasai Shard. It doesn’t like being here.”

“I mean from the plague dust.”

“Oh. No, just a great deal of agitation. I have told you it doesn’t really talk.”

“You can cut that out, MyShard.” Batu glanced across at Elnar. The sensors ensign was intent on the displays before her, so he cleared his throat.

She looked up. “Sorry, sire. I can’t detect anything other than what we picked up from orbit.”

Batu gestured at the sand around them. “Anything around here?”

“No. All the low-grade signals are coming from the settlement and a very small area around. As if the plague sand has concentrated itself.”

“Great. In which case, it’s not a standard IMTel nanophage derivative,” said Baray. “Kenar and Rian set up the compression cannon. The rest, lead out.” The squad moved slowly forward, the guards scanning either side of their route, their impact cloaks flapping in the slight breeze. It was only the faint flicker of wind-blown dust impacting on their armour that betrayed its origin as heavily-disguised, Combined Command hyperlight armour.

There was no reaction from the spire or the ruins of the settlement, almost as if it were ignoring them or was quiescent. They stopped and Elnar reconfigured her equipment, then gave the thumbs-up. Baray gave a signal and from behind them the compression cannon opened up on the central spire.

A hole appeared, then another and a crack appeared. The top of the spire began to topple. Slowly it keeled over and tumbled down the slopes, dust and sand rising into the air and pillowing outwards.

“Wiped out everything we touched,” came Kenar’s voice over the sharded comms channel. “I can’t vouch as to whether or not what collapsed is active.”

“Understood.” Baray looked at Batu and Ensign Elnar. “Anything?”

Elnar raised a hand. “Wait.” She was looking intently at her readouts.

“Wait for what?” prompted Baray.

“I’m picking up some increase in communications,” said Elnar. “How did you know?” Warning lights flickered red and she and Baray focused on her holodisplay.

Batu examined the distant, broken spire and the billowing dust and sand. “Is it me, or is that dust and sand around the base growing thicker rather than settling?”

Elnar and Baray looked up from the monitors. Dust devils turned into miniature tornados and whipped up yet more of the sand. Dust billowed out then the whole pilewas whisked into the air rolled towards them. “I think it’s annoyed,” said Baray. Static lightning flashed between the tornadoes as the artificial sandstorm gathered pace. “Very annoyed.”

Read the last part in this series here