Data storage stacks vital to the success of the campaign have been located in land substantially ahead of each force’s main body. You forces are to seize control of these points at which the stacks are located and prevent the enemy from doing so.

Set up terrain as described in the Playing the Game guide in Rules Central. Then three objective markers are placed on the table, one roughly in the centre and one roughly in each player’s table half 15” from the base edges and ~12” in from each side table edge such that they roughly draw a diagonal line across the table (see diagram). None of the objective markers can be placed in difficult terrain: organisers should move the terrain or markers the minimal distance required to do so.

Half of each force is deployed on the table within one move distance (1M) of their base, long table edge (see the Playing the Game guide for standard deployment rules ). If either side has probes these must be included in the initial deployment.

Remaining units may enter the battlefield from the first turn onwards from their own long table edge. A successful order test is required to move onto the table from turn 2 onwards as described in the standard rules for deployment. 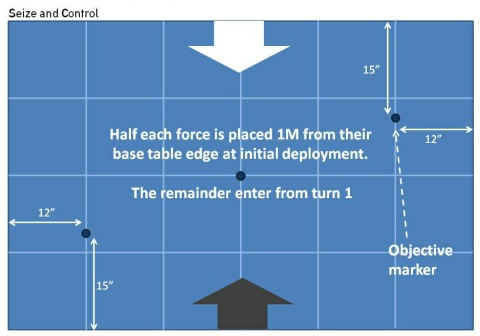 The objective is to seize control of the objectives (see Objective Control, above) and place a unit within 1M of the opponents base line to hamper its retrieval of the information and to deter reinforcements arriving.

The game is played until one side reaches its break value or until six turns have elapsed. Then roll randomly to see if another turn is to be played in the standard fashion as described in the Playing the Game guide in Rules central. This may mean that in a close game, a broken force has a chance at breaking its opponent.

An extra +2 VPs are gained for having a unit within 1M of the opponent’s baseline and +2 VPs if the opponent is broken, up to a maximum of 10VPs.

A victory is awarded to the force with 3 or more VPs than its opponent and which remains unbroken, the defeated opponent being awarded a loss. Otherwise a draw (winning or losing) is awarded.

Controlling units are any apart from sharded, probe and beast units. Control can be established by a unit having one or more of its models, or the body of its model, within 3” of an objective. Units that are Down are still counted as being able to establish control as a tactical decision to do so may well help their survivability, but at the cost of capability of course! To claim control, no other, enemy controlling units must be able to claim control of the objective.

The objective markers themselves should be 1”–2” in diameter and are counted as the same type of terrain in which they are placed, normally clear. Markers are provided below.